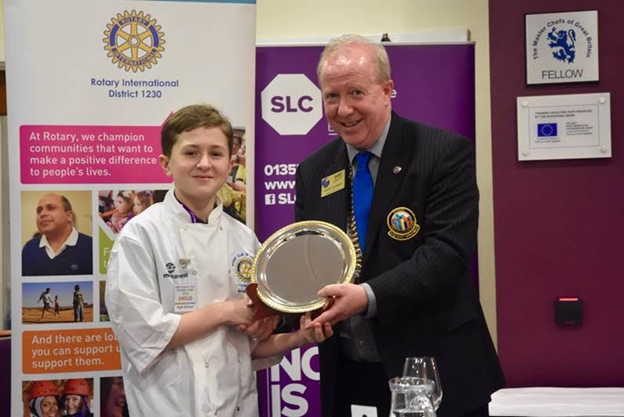 The final was held at Ardnamurchan High School on 14th November. Angus Dunn took first place, and the title and trophy of Rotary Young Chef of the Year, while Katie MacGillivray shared the runner-up position and trophy with a pupil from Mallaig High School. Angus will go forward to the District Final of Rotary Young Chef in East Kilbride in January while Katie will represent Ardnamurchan High School at the local final of the Springboard Future Chef competition in Fort William, also in January.

Well done to both and thanks to parents and Michael Campbell, WHC tutor for their support. Thanks to Donald Young, Marine Harvest sponsor represented by Rosie Curtis, Brian Hume and local Head Chef Gary Phillips of Kilcamb Lodge Hotel.

The quest to find this year’s Young Chef of the Year commenced at Ardnamurchan High School on Monday, September 25th.  The standard of cooking was excellent, especially considering that there were five fifth year pupils and two third-year pupils participating.  The judges were Rotarian Donald Young and Rosie Curtis from Marine Harvest who, on completion of the salmon dishes, immediately checked that they had been cooked correctly. All were.The winner was Katie MacGillivray with the main dish of fillet of salmon in an Asian marinate with noodles and a vegetable stack and with a dessert of lemon meringue soufflé with fresh cream. Runner-up was Angus Dunn with a starter of Bruschetta on ciabatta and with a main of Carbonara with freshly made tagliatelle and wild chanterelle mushrooms.  The other five competitors were Calum McIntyre, Rona McIntyre, Alex MacKinnon, Archie Green and Kirsty MacDonald.

Thanks to all the competitors, judges Donald and Rosie and to Ardnamurchan High School for their enthusiasm.